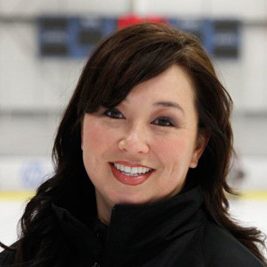 Coach Michelle Racimo has been on the ice for over 30 years and began coaching power skating and figure skating in 1994. Today, she uses her experience as a former United States figure skating competitor to instill advanced skating skills in hockey athletes.

Her focus is developing a solid skating skill foundation with emphasis on skating mechanics, explosive speed development, economy of movement and edge control. She believes that muscle memory – achieved through a consistent and rigorous practice standard combined with skill-specific cross training – is the fast track to athletic success.

Michelle has earned a reputation for having a rare eye for skating mechanics and a deep analytical ability to dissect how hockey players move on the ice. She observes a player’s movement, identifies their priorities for development, and goes to work making strengths out of their weaknesses.

My job is to identify your weak side before the other team does.— Coach Michelle Racimo

In 2017 she founded Power Skating 100, which quickly became an epicenter of power skating development. Her small group, full ice concept has proven to be a powerful boost to any player’s current hockey training program.

Michelle is a USFS Silver Medalist and a former Junior Ladies competitor. She is a member of USA Hockey, USFS, PSA, an ISI certified Silver Judge, and a proud representative of California’s Bay Area.

To train with her, register for a Power Skating 100 clinic here or fill out a player profile. Her private lesson availability is extremely limited, but if you’re a committed player who is ambitious about improving your hockey skating, and game, she would like to connect with you.