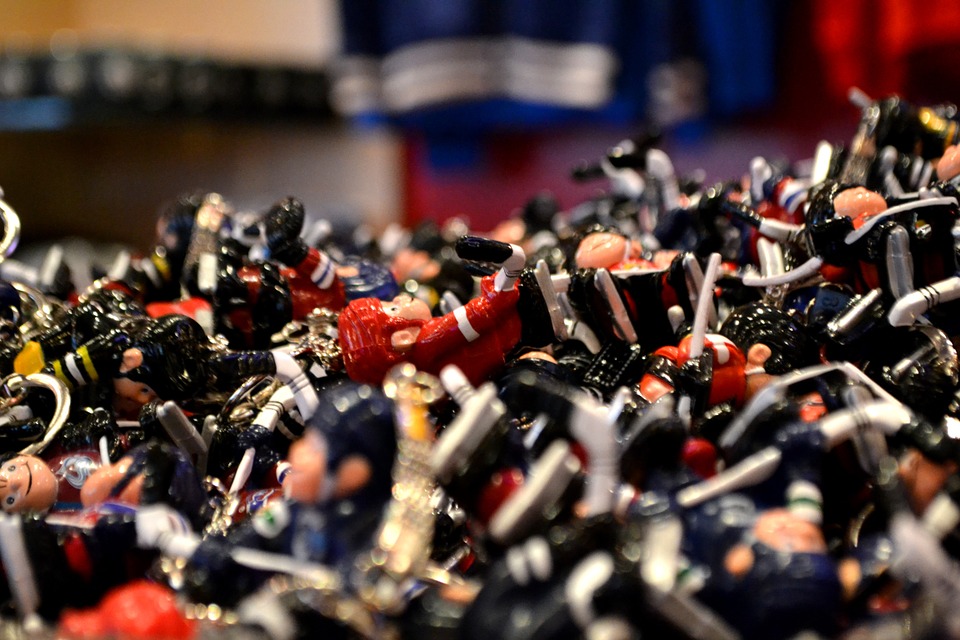 Bar down: when the puck goes in the net off the bottom of the crossbar
Barn: an arena rink
Barn burner: a high-scoring game
Beauty: a pretty play
Biscuit: the puck
Bottle rocket: when a goal breaks the goalies water bottle
Breakaway: when a player has the puck and an open skating lane to the net with no one in front of him
Bucket: a helmet

Celly: a celebration after a goal
Cheese: the top shelf of the net (see, top cookies)
Chel: the EA Sports NHL video game
Cherry picker: a player who stands behind the opposing teams defense in hopes for a breakaway
Chiclets: teeth
Chirp: when you talk trash to opposing players
Clapper: a slapshot
Coast to coast: taking the puck all the way down the ice
Crossbar: the post that runs along the top of the net

Dangle: a deke
Deke: a pass
Dirty: used to describe an incredible deke or pass (see, filthy)
Duster: a player who doesn’t play much and “collects dust” on the bench

Face wash: when you shove your glove into an opponents face
Filthy: also used to describe an incredible deke or pass
Fishbowl: a full face shield
Five-hole: the area between a goalie’s legs
Flamingo: when a player lifts his leg to avoid blocking a shot
Flow: long hair (see, lettuce)

Garbage: referring to the puck when there is a rebound, picking up the garbage means putting the rebound in the net
Gino: a goal
Gongshow: when a game that is getting out of control, possibly from the score, inspires a lot of fights or big hits
Goon: a player whose only talent is fighting, usually to keep the teams best players safe
Gordie Howe hat trick: when a player scores a goal, adds an assist and gets in a fight in one game
Grocery stick: the player who separates the offense from the defense on the bench

Hands: refers to a player who has good stickhandling and often dangles opposing players
Hoser: derived from the when the losing team would hose down the ice before the invention of the Zamboni

Junction: the corner of the goal where the crossbar and post meets (also referred to as the “junk”)

Kronwalled: a big hit a defenseman lays on a player attempting to carry the puck out of his zone, derived from Detroit Red Wings defenseman Niklas Kronwall who is famous for this type of hit

Lettuce: hair, including both on the head and facial hair (see, lip lettuce)
Light the lamp: scoring a goal
Lip lettuce: a mustache
Lumber: a hockey stick, derived from when sticks were made of wood (see, twig)

ODR: an outdoor rink (see, pond)
Open ice hit: a big hit on that happens away from the boards

Pigeon: a player who can’t score on his own and relies on others to feed him the puck or pick up the garbage
Pipe: the goal post
Pinch: when a defenseman moves into the offensive zone in an attempt to keep the puck inside the zone
Playoff beard: when players stop shaving during the playoffs
Point: a defenseman in the offensive zone
Pond: where players play outdoors in the winter
Pylon: a slow defenseman that often gets skated around

Sauce: a pass that leaves the ice to make it more difficult for opposing players to intercept
(The) Show: the NHL
Silky: used to describe a smooth play
Stripes: the referee
Sin bin: the penalty box
Slot: the high-scoring area in front of the net
Snipe: a perfectly placed shot
Stack the pads: when a goalie lays on his side and puts his pads on top of each other to make a save
Stay at home defenseman: a defenseman who is strong in his own zone but not particularly good in the offensive zone
Suicide pass: when a player receives a pass that puts him in danger of immediately receiving a hard hit
Sweater: a hockey jersey

Tape to tape: a pass that perfectly lands on your teammate’s blade
Tic-tac-toe: refers to a quick passing play that results in a goal
Toe drag: when a player uses the end of his blade to dangle the opposition
Top cookies: top shelf (where grandma hides the cookies)
Trapezoid: the area behind the net where a goalie is allowed to play the puck
Turtle: when a player completely covers himself up as to not be involved in a fight
Twig: a hockey stick, derived from when they used to be made of wood

Wheel: refers to a players strong skating
Wraparound: when a player takes the puck around the back of the net and tries to score in one full motion