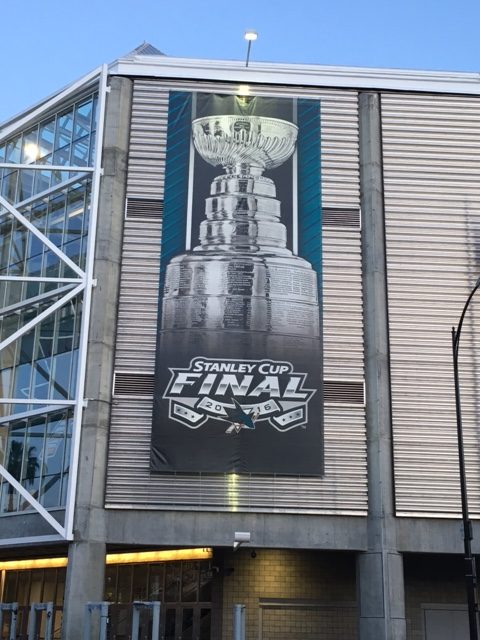 I woke up pretty early this morning, 4:30 AM to be exact. I set out to start my morning and one of my errands brought me close to SAP Center here in San Jose, CA. I decided to head over to the Shark Tank because I have been wanting to take a picture of the big Stanley Cup banner that hangs on the front of the building. I thought, “Why not go now? Early morning is a rare opportunity where there’s no crowd. It’s the quiet before the storm.” I told myself.

It was when I parked, got out of my car and began taking snapshots that something unexpected hit me. Suddenly early morning skating memories flashed through my mind.

The first flash was about growing up here in San Jose as a competitive skater. Back then there were no San Jose Sharks—they didn’t exist here in the early 1980’s. Actually, hockey didn’t really exist here in California at all. I guess no one considered indoor ice hockey would catch fire in the place with the best outdoor weather in the nation. Second, I remember when I started working at Sharks Ice San Jose, back in April 1999 (called Ice Centre back then). The Sharks were not the team they are now. There was no Shark logo on center ice, no San Jose Sharks swag in the Pro Shop, and no fans hanging out in the back lot. It was kinda boring actually. A work day was just a regular day.

Then I remembered when I realized the San Jose Sharks had arrived and it wasn’t because I saw the logo, swag or fans in the back lot. It was because I saw an entire city, wearing teal and black. I heard hockey conversations in my neighborhood Starbucks and I saw Sharks Ice go from 2 surfaces to 4 surfaces. We became the “Home of the Sharks.”

In these brief few flashbacks I was overcome by hope, spirit and pride for my hometown. I completely grew up here, and a large portion of my life has litterally been spent on San Jose ice. Being able to see the San Jose Sharks fight their way to the Stanley Cup Finals is an amazing experience. The excitement, the positive energy, the daily adventure at the rink, the fan support, the Sharks Ice staff and Community, the Sharks Organization and the Sharks players who make this all possible. I am humbled to be surrounded by all of this in my daily life, and honored to be an original member of the Black-and-Teal community. I’m thankful and no matter what happens tonight in Game 6, I will forever “Bleed Teal.” Thank you San Jose Sharks for representing the San Jose ice scene and bringing us to the national stage. #StanleyCup #SJSharks #WeWantTheCup #TurnUpTheTank #WeBleedTeal